Hapkido is a Korean martial art that prioritizes self-defense. It is characterized by having a long repertoire of strokes, with graceful and effective movements.

Regular training has benefits for health and quality of life. The practice helps to tone the muscles and ensure better physical and mental conditioning for your supporters.

Throughout this post, we will explain more about this fantastic martial art that each year manages to further expand its number of practitioners.

Are you interested in the subject? Continue your reading and stay inside!

Hapkido has Korea as its birthplace. At the time, the country was not yet divided and its locality was basically composed of three great kingdoms with feudal characteristics.

Yong-Sool Choi is considered the father of the martial art that was developed with concepts from Daito-ryu Aikijujutsu – Japanese fight similar to traditional jiu-jitsu.

Over the years, Choi increased the number of techniques and strokes to perfect his ancient art. This helped to transform his unique style into a new martial strand.

At the end of the 1950s, Choi’s teachings began to become prominent in Korea. And in the 70s Hapkidô arrived in Brazil, specifically in the state of São Paulo.

At first, martial art was inserted into the Brazilian army, in the city of Osasco, as part of military training.

This introduction took place for two reasons: for its effectiveness and for its philosophical character focused on combat.

This martial art has three fundamental principles, which in Korean are called Yu, Won and Wa. See what these words mean:

In fact, it is interesting to note that the very name of martial art also has a special meaning:

Therefore, Hapkidô has as a free translation “path of the union of inner strength”. The philosophy of this martial art is one of the main points that set it apart from the others. 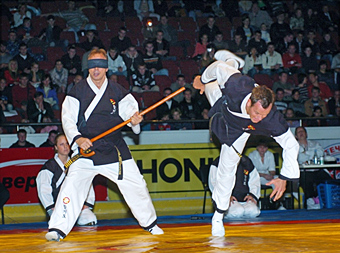 Among the most apparent benefits are physical (muscle strengthening, resistance to aerobic and anaerobic capacity) and mental (increased self-esteem and resilience).

The indication of the activity is practically unrestricted. There are only two main requirements: being over 5 years old and not in any debilitating condition.

There are several federations and championships across the country, which stimulates competitiveness and especially the fundamentals of this art that enchants more and more people in the world.

Finally, it is worth mentioning that there is a system of bands similar to karate, and that the student progressively advances to the greatest degrees of knowledge of this fighting style.